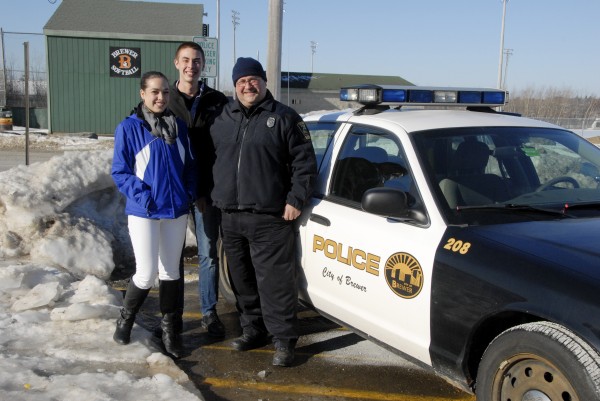 BREWER — Morgan Forrest could not be happier with the results of her recent trial at Brewer High School.

Accused of manslaughter and hazing, Forrest took the witness stand while under the watchful eye of “judge” Andrea Jordan. During persistent questioning by “district attorney” Sam Johnson, Forrest repeatedly denied her guilt.

A jury of her peers later acquitted Forrest on the manslaughter charge, but convicted her of hazing. She explained afterwards that “I was in college and engaged in some activities that resulted in someone’s death. I was not guilty of manslaughter.”

Thus ended the second trial held this academic year in the American Law and Trial Class taught at Brewer High by Jordan and Brewer police officer Peter Rancourt. Assigned as the BHS resource officer, he introduces participating students to the world of law enforcement; they join him in the Ride Along Program sponsored by the Brewer Police Department.

“In American Law and Trial, we expose kids to the American court system and the world of criminal justice,” said Jordan, who started teaching the class three years ago.

Open to Brewer HS sophomores, juniors, and seniors who have taken civics, the ALT class introduces students to many law-enforcement and judicial functions. Attorneys, forensic investigators, and other professionals speak about their jobs, and students “sit in on one-day trials” at the Penobscot Judicial Center in Bangor, Jordan said. These trials could involve traffic violations, shoplifting, and even embezzlement.

The Ride Along Program is a popular aspect of the class. Each student joins Rancourt for an approximately hour patrol during which Rancourt “explains what he does,” Jordan said.

Johnson, a Brewer resident and BHS senior, stepped into the Brewer PD SUV on Dec. 5, 2013. “We drove around, and he (Rancourt) explained to me the procedures” and the boundaries within which Brewer police officers patrol, Johnson said.

“This is a completely volunteer program,” Rancourt said. “We need a permission slip signed. We do a background check on whoever rides in our vehicle.” A similar citywide Ride Along Program is open to adults; only through the ALT class can minors ride along on a patrol.

During a Ride Along, “students can ask any question they want about the ride or the [law-enforcement] career,” Rancourt said. “The questions can be law-related or employment-related.”

He explains police procedures, and while he makes no traffic stops when doing a Ride Along, some students have watched from Rancourt’s cruiser as other Brewer police officers made an arrest.

“Students who have ridden along with me have been pleased,” Rancourt said. “They ask a lot of questions.”

In the classroom, Jordan focuses on the law and the judicial system. Students learn the difference between civil, misdemeanor, and felony crimes and receive a thorough introduction to trials, the attendant courtroom etiquette, and legal procedures.

Jordan schedules one mock trial per academic quarter. She splits each class — this year she is teaching two classes and 45 students, compared to one class and 19 students last year — into two groups and designates one group as the defense team and the other group as the prosecution team.

Provided with a trial’s scenario, students decide who plays which role. For a recent trial, Forrest became the criminal suspect, charged with manslaughter and hazing. Johnson was tapped as the lead attorney for the prosecution.

Jordan “teaches the students all about what happens in the courtroom,” Rancourt said. “They learn courtroom etiquette,” and “she educates them as to the direct line of questioning.” Students learn how juries are selected, how objections are raised by attorneys, and how to dress appropriately for a courtroom setting.

“I’ve always had an interest in law,” said Forrest, a Brewer resident and BHS senior. She belongs to the school’s mock trial team that competes interscholastically in Maine.

“We get pretty competitive” in Jordan’s class and on the intervarsity level,” Forrest said.

Before questioning Forrest, “I had to prepare my questions for her,” Johnson said.

Taking the American Law and Trial class “is really my first exposure to the topic,” he said. “I have goals to be an attorney one day. This class is good experience.

“The class is educational and a lot of fun,” said Johnson, who plans to go into corporate law. He has been accepted at the University of Maine Business School; after earning a business degree there, Johnson wants to attend “law school, hopefully in Boston.”

“It’s one of my favorite classes,” Forrest said.

She “is looking to get a major in marketing” with a minor in broadcast journalism or psychology. Already accepted by UMaine, Forrest is waiting to hear from other schools.

A copyright article from The Weekly by Brian Swartz.